Mothers in Developing Nations Should Take Zinc Supplements Throughout Pregnancy

In the developing world, childhood diarrhea is a serious problem with often fatal consequences. Many throughout the western world would be surprised to learn that in 2009, the World Health Organization estimated that childhood and infant diarrhea kills over 1.5 infants and toddlers each year worldwide. 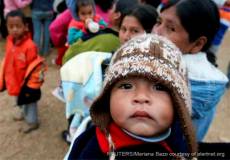 The good news is that there is hope on the horizon. A recent study has shown that of all things the mineral zinc can help to reduce and prevent instances of infant diarrhea in the developing world. The occurrence of diarrhea in newborn babies and infants may be dramatically reduced when mothers take zinc supplements throughout the course of their pregnancy, according to a new study spearheaded by Dr. Laura E. Caulfield, of the Center for Human Nutrition, Department of International Health, Johns Hopkins Bloomberg School of Public Health in Baltimore.

Infant and childhood diarrhea is a severe and often fatal problem throughout much of the developing world, including countries such as Peru, which is where the study’s efforts were concentrated. A lack of readily available clean water is often a leading cause of the bacterial infections that cause severe diarrhea.

Zinc deficiency is also a common health problem throughout the developing world. This often compounds the problem as it related to childhood and infant diarrhea.

The mineral zinc is widely renowned for bolstering human immunodefence systems, and consequently helping to stave off disease and illness. Zinc deficiency dramatically increases the risk of death from diarrhea-related illnesses, as well as a number of other health maladies plaguing the developing world, including pneumonia, malaria and a myriad of other diseases of various natures.

The World Health Organization has now issued a doctrine recommending zinc supplementation in conjunction with rehydration therapy as a means of treating acute diarrhea, as past studies have indicated that zinc therapy can help one get over severe bouts of acute diarrhea more quickly when supplementing with zinc.

It is recommended by this author that those taking zinc supplements do so after eating, as taking zinc on an empty stomach can quickly lead to an upset stomach and ptentially even vomiting.

The study was initially published in the The Journal of Pediatrics in March of 2010.