August 05, 2009 – For men who believe they are going through a midlife crisis, researchers say they may actually be experiencing something very genuine – the male version of menopause known as andropause. Occurring by the time a man reaches 40’s to mid 50’s, andropause is the result of a gradual decline in the hormone levels including testosterone. Symptoms manifest themselves in a number of ways with everything from emotional, psychological and behavioral changes to loss of energy, decreased stamina and sexual dysfunction.

Although a decline in hormone levels will occur in virtually all men with age, there is no way of predicting who will experience andropause symptoms severe enough to seek medical help. That is why it is important to know that low testosterone levels can impact a man’s quality of life and may expose him to more significant health problems such as heart disease, osteoporosis and stroke.

Symptoms of Andropause or Testosterone Deficiency include: 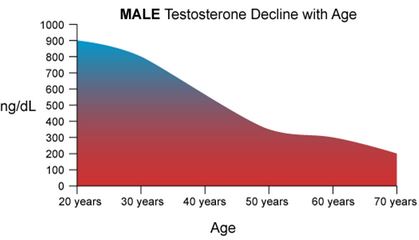 Results of research published in 2002 revealed that men who have higher levels of “bioavailability” testosterone – testosterone that is not bound to protein – appear to perform better on tests of mental performance than men with lower levels of the hormone.

The medical management of testosterone is crucial to ensure that a patient receives only enough of the hormone to replete lost levels. Many forms of administering testosterone have been developed, including intramuscular injections, suppositories, transdermal patches, oral micronized capsules, and sublingual lozenges. Oral administrations seem to be the least effective method.

Risk in men? Traditionally testosterone restoration was thought to be associated with heart attacks and prostate cancer. If this were the case, men should have heart attacks and prostate cancer when the testosterone levels are the highest in the 20’s instead of when they are the lowest after age 50. In fact, the New England Journal of Medicine finally analyzed this in 2004 and published their conclusion that it is low testosterone and high estrogen, which is associated with prostate cancer. The cardiology literature has since shown that men who maintain testosterone levels in the upper ranges are lower risk of cardiac and neurologic events.

Middle-aged men should receive bio-identical hormone replacement therapy (HRT) in order to treat andropause the male equivalent of menopause according to doctors. Members of the recently launched Andropause Society (20/20 Harley Street, London, W1N 1AL, United Kingdom) are campaigning for the condition to be recognized and treated accordingly; however, some members of the scientific community are still in doubt as to whether male menopause actually exists. Although male HRT is available, few doctors currently prescribe it. Dr Malcolm Carruthers, a specialist in men’s health and Chairman of the Andropause Society said: “We have got an aging male population and it’s important to treat these symptoms and keep them in good condition physically and mentally.”